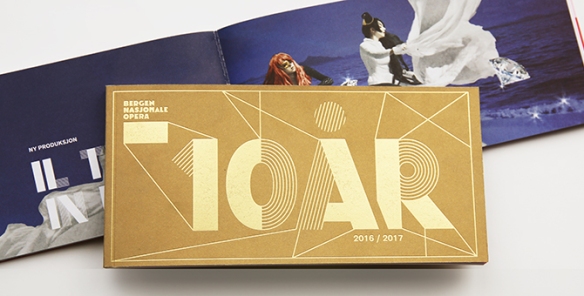 A new season, a special season – our 10th anniversary as a company – and a great deal to celebrate.

Two days ago, our new brochure landed in the office, filling the air with that curious acrid new print smell which both excites and intoxicates. We dived into its gold-wrapped pages outlet , flipped through the pages, ooh-ed at the photographs and aah-ed at the events. We may say it ourselves, but our sense of achievement is enormous.

Bergen National Opera is a small company. Its output is enormous and our pride in the quality therein gigantic. 10 years old is perhaps still babyhood compared to some of our European colleague companies, but it´s so good – so satisfying – to be able to read our brochure and see that certain directors are back after major successes, that favourite singers return, and that work created here in Bergen is impacting companies far beyond our shores; that kids who started in our children´s choirs are now BNO Unge Stemmer at prestigious conservatoires; that Rame Lahaj, a star in last season´s Madama Butterfly has now been asked to Opera de Paris for two major roles; that a composer and librettist who met at a BNO/AdOpera Akademi now have a 7-country hit co-production; that our productions are now in repertoire far afield and our casts are cropping up on world-wide tours.

Looking forward, from August onwards, it´s all go. At Mimi Goes Glamping, our boutique festival of opera in nature, septuagenarian Sir Thomas Allen makes his debut as a troll. Yes! He´ll star alongside a dozen local Sogn og Fjordane singers in a new community opera based regional fairytale. Unmissable in an altogether astonishing programme of events. On the main stage, super-smart duo, director Nicola Raab and designer Ashley Martin Davies make BNO debuts in our new production of Bellini´s I Capuleti e Montechi – our season is greatly centered on celebration of the voice, so bel canto opera is a must – with our Georgian/Russian Romeo and Guilleta, Nino Surguladze and Kristina Mkhitaryan.

Then, hurrah, we are off on tour with Dama til Mozart, a new eccentric little chamber piece premiering at Larvik Baroque Festival and Mimi Goes Glamping, before heading to nine West Coast Norwegian venues. Director Tom Guthrie explores Constanze Mozart´s volcanic life as a composer´s wife – lots of hilarity, but also a deeply touching piece.

Another star returns – Netia Jones – whose productions for BNO with Festspillene i Bergen have changed our city, and many others’ perception of opera for ever. With film, real-time video, stage direction and design, she weaves together stories which quicken our breathing. Now she tackles the iconic: Handel´s Messiah, albeit in a new edition by Malcolm Bruno and Caroline Ritchie which takes the work back to its original conception as a secular, theatrical operatic experience. We´re collaborating on the adventure with singers from Norway, Sweden, Croatia, Belgium, Russia and the USA. Hurrah for the universality of art. And, also for Festspillene, we combine with wonderful Edward Gardner and Bergen Philharmonic Orchestra on a concert performance of Britten´s Peter Grimes. The cast, with towering Stuart Skelton as Grimes, is fantastic: Roderick Williams sings his first Balstrode with Giselle Allen as Ellen Orford.

Around all this, BNO´s schedule buzzes with school projects, development academies for composers and librettists, performances in off-the-wall places, discussion groups, all the below-radar activities at the heartbeat of the company. And of course, our Opera Pub, the most joyful, most including, most fun evening of every month, where Bergen and beyond joins to sing, to listen, to adventure and to celebrate the human voice.

In ten years that operatic voice here in our city has grown to a resonant shining fortissimo. Happy birthday to us. And happy listening to all of you.